In this and my next post to this blog, I write about a recent trip along the Columbia River and invite you to think about sound’s ability to read violent history against the grain and memorialize the silence that followed the destruction of vibrant sites of life. How, I ask, can we listen to the continued presence of an absence? And: how can certain practices of listening evoke or recall what has been seemingly obliterated from our field of vision?

Traveling along the Columbia River in early October this year, I visited six different sites associated with the Confluence Project, all of them launched as responses to the Lewis and Clark Bicentennial in 2005. Unlike Lewis and Clark’s tale of heroic discovery and traversal, the project’s ambition was to recognize the many Indigenous River Bands, Tribes, and Nations who had lived along the Columbia and its tributaries long before Thomas Jefferson’s eighteenth-century voyagers came here—and whose existence and interaction with the river valley’s ecology have suffered devastating transformations ever since 1805. Maya Lin, the designer of Washington DC’s Vietnam Veterans Memorial, was recruited as the project’s principal artist. In collaboration with Native representatives, she developed or co-developed all six memorial sites of which five have been realized. These sites stretch all the way from the confluence of the Snake and Clearwater Rivers in Eastern Washington to Cape Disappointment, Oregon, where the Columbia meets the Pacific Ocean.

Almost twenty years after its inauguration, the Confluence Project and some of its sites today show some signs of aging. Not entirely surprising, the project as a whole has also run into various thorny issues regarding the politics of representation, creating a situation in which some tribal organizations have withdrawn their support for further collaboration. Be that as it may, the project continues to raise intriguing questions about the ethics and aesthetics of listening, and about how sound can stand as a witness to the American genocide of Indigenous populations and the silence it in so many ways created. In this blog, I write about the Listening Circle at Chief Timothy Park, in the next about the unbuilt site at Celilo Falls.

Lin’s Listening Circle at Chief Timothy Park is situated on a small island amid the Snake River, surrounded by treeless basalt cliffs on either side of the water. Long before Lewis and Clark “discovered” this land, it had been the homeland of the Nez Perce. A small bridge connects the island and its campground to the river’s south bank and the highway running to nearby Clarkston, WA, and Lewiston, ID. Lin’s circle isn’t really a circle but six tiered semi-circles made of stone, each with openings to the East and West. During the site’s dedication, members of the Nez Perce gathered here: women facing North, men facing South, elders seated in the West with no one in their back, and the East left open to welcome the new day.

When I visit the site, much to my surprise, the bridge to the park—managed by the U.S. Army Corps of Engineers—is closed off with barricades, its campground is shut down as well. There is no cell phone signal here, so I can’t make further inquiries. After a moment of hesitation, I decide to climb over the barriers and cross the bridge. As it turns out, I have the entire island to myself. The arced basalt stones of the Listening Circle are partially overgrown. When approaching the site over the hills of the island you can hear the noise of highway and railway from the river’s edge. But once you sit down, the world goes entirely silent. After sitting on one of the arc’s for a while, I make a two-minute recording of this silence with the equipment I have brought along. Unsure about what I am doing and what it means to record silence, in a second attempt, I record my steps as I walk up to the circle, then the silence for a minute or so, then my steps as I walk away through the dry grass. As if trying to create an auditory frame to make the silence more reverberant. But this strikes me as equally futile, perhaps even silly. Not only because I start to wonder whether it makes sense at all to speak of acoustical frames. But more so because the sounds Lin’s Listening Circle wants us to attend to aren’t just exterior sounds or cochlear transmissions, but inaudible echoes of the past and imperceptible resonances in the present—a soundscape that exceeds the ears’ and any recording equipment’s range. No mechanical device, I tell myself as I pack up my mic, will ever be able to catch the reverberations that structure and may possibly emerge from the heart of this silence. And no non-Native listener may ever be fully able to hear whatever can be heard here to recognize what settler colonialism has done to these lands and its people.

“Because the sounds Lin’s Listening Circle wants us to attend to aren’t just exterior sounds or cochlear transmissions, but inaudible echoes of the past and imperceptible resonances in the present.” 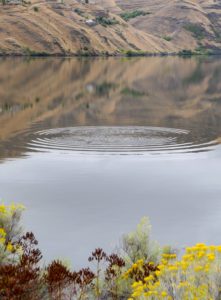 As I walk back across the bridge, a fish briefly jumps up and disappears in the water again, leaving a pattern of calmly expanding concentric circles. It mimics the shape of Lin’s Listening Circle. The fish jumps three more times, following my passage across the bridge. Three more patterns. Three more echoes of the vacated Listening Circle. I snap a picture with my camera. This is attainable, unlike the challenge of listening to echoes of the past and unsettled presents.

Robin Wall Kimmerer, after experiencing the curious distortions created by a rain drop, writes this about the art of listening: “I can see my face reflected in a dangling drop. The fish-eye lens gives me a giant forehead and tiny ears. I suppose that’s the way we humans are, thinking too much and listening too little. Paying attention acknowledges that we have something to learn from intelligences other than our own. Listening, standing witness, creates an openness to the world in which the boundaries between us can dissolve in a raindrop. The drop swells on the tip of a cedar and I catch it on my tongue like a blessing.” (Robin Wall Kimmerer, Braiding Sweetgrass: Indigenous Wisdom, Scientific Knowledge and the Teaching of Plants. Minneapolis: Milkweed Editions, 2013. 300]

As I climb back over the barricades and leave Chief Timothy Park on this early fall day, I wonder what it takes to ready oneself for such practices of learning and listening. What can listening do to stand witness to the violent colonization of these lands, its people, and their mutual relationship? Thinking about my picture of the fish’s ephemeral ripples, I also ask myself whether any effort to capture the sounds and unsounds of Chief Timothy Park with acoustical media, photographs, perhaps even words, harden the very barriers, the separation of intelligences, the borders good listening in Kimmerer’s sense may be able to dissolve? What does it really mean to listen to silence, I ponder as I drive off, and to what extent can the experience of silence expand our knowledge of the world and help us recognize unspeakable historical losses?

Lutz Koepnick is the Max Kade Foundation Chair in German Studies and Professor of Cinema and Media Arts at Vanderbilt University (Nashville, USA). Koepnick has published widely on film, media art, new media aesthetic, sound art, and intellectual history from the 19th to the 21st century. He is the author of The Long Take: Art Cinema and the Wondrous (2017), Michael Bay: World Cinema in the Age of Populism (2017), On Slowness: Toward an Aesthetic of the Contemporary (2014); Framing Attention: Windows on Modern German Culture (2007); and The Dark Mirror: German Cinema between Hitler and Hollywood (2002). Koepnick is the co-author of Windows | Interface (2007), and co-editor of various anthologies on sound culture, new media aesthetics, aesthetic theory, German cinema, and questions of exile. His book Resonant Matter: Sound, Art, and the Promise of Hospitality was published by Bloomsbury in 2021.