In this regular Q&A series, we interview authors and major figures in the field about their work, interests, and overall thoughts on sound studies. This week, we spoke to Caleb Kelly, a curator and academic interested in the areas of sound (art) and noise.

Since 2013, I’ve been involved in a project entitled Imperfections, based at the University of Amsterdam. Led by Professor Ellen Rutten, the research has focused on the seemingly unlikely contemporary interest in imperfections in the arts and culture. The research ranges from design company, Droog’s use of imperfect tableware to jewellery designed to warp and temporarily disfigure the wearer’s face to computer games coded to destroy themselves when played. Rutten is a Professor of Russian Studies, as is Yngvar Steinholt; there’s a healthy stream of Russian art and punk in the research group. The focus on the often dangerous and destructive Russian art and punk scenes is complemented by my interest in noise in electronic music creation and ‘cracked media’. My contribution to the project focuses on “dirt[y] media” in the form of non-industrial earth mineral-based media art (the original unbracketed term throws up all sorts of links in a google search). The term works on several levels as most media practices under investigation are dirty while a few are created from actual dirt. The publication for Bloomsbury’s Thinking Media series, entitled Imperfections: Studies in Mistakes, Flaws, and Failures, draws on academics, filmmakers and critics to develop a broad picture of how imperfection can be thought and, in the end, how it problematizes the desire for perfection itself.

What got you interested in the field of sound studies?

I grew up in Dunedin, a small city near the bottom of New Zealand. Dunedin is well known for the music scene that formed around the record label Flying Nun. Somehow, a tiny, cold city far away from the centres of music grew a scene that became known across the globe. I grew up going to small pubs to see The Chills, The Verlaines, The 3Ds, Straitjacket Fits, and Bailter Space. But, of course, there must be a counter-movement when an underground movement meets with success; Expressway and the venue/collective Super 8 formed this movement. At the centre of Expressway was The Dead C, a band that was eye-opening and dangerous to my teenage ears (my taste in music caused numerous issues for me at the boys only, rugby leaning, high school I attended). The noise and often destructive performances from these bands have never left my purview and continue to inform my academic pursuits and curatorial projects.

Growing up surrounded by alternative music cultures developed into a deep and elongated interest in noise in music and art. This noise finds form in extreme music cultures leading to my involvement in producing experimental music events in Australia, including a six year long monthly music series impermanent.audio; a show on university radio entitled Audio Daze; and the national noise music festival, What is Music?

What interesting developments/research/innovations are happening in sound studies right now?

I’m watching closely as the usually Euro/American white male over representation begins to shift into a much broader range of voices in the study of sound in the arts. In some ways, the return of materialist philosophies saw the return of these white men who used it as a means to work around social, cultural, political approaches that had emerged. It was a relief to see this approach wasn’t more than a mistaken blip in the discourse.

From my point of view, I always try to focus on works that I have personally experienced. This leads to the very deliberate addition of Australian artists and New Zealand artists into my writing, an inclusion that doesn’t always meet with approval. I’ve experienced peer reviewers who demand a broader focus on theorists and practitioners and then list people solely from the Northern Hemisphere. A raised awareness of the sound arts in Australia can be witnessed emerging back in the 1980s, including publications such as New Music Articles (1982–1992) and a dedicated issue of Art & Text (1989); festivals such as the similarly titled Soundworks: A Festival of Experimental Sound in Perth (1985) and Soundworks Festival (part of the Biennale of Sydney in 1986); and the long-running ABC National radio program The Listening Room (1988–2003) are all examples of the heightened interest in the sound arts.

Within this frame, I’ve been working on a series of exhibitions that looks to sound as a means to learn about and experience materials. The exhibition Sounds, Materials and the Black Mountain College was exhibited in 2019 at the Black Mountain College Museum in Asheville, NC. The exhibition looked to the various approaches to materials developed within the College mid-century, including works by Anni Albers, John Cage, Robert Rauschenberg and Buckminster Fuller. These approaches were displayed alongside four installations produced by two NZ artists and two Australians that all sounded materials in a hands-on and hand-made manner. The second exhibition, Material Sound, is currently on a ten-art gallery tour in Australia. This exhibition takes very physical media art practices that produce sound and, in doing so, creates new and unexpected sonic outcomes.

The term ‘sound studies’, not unlike ‘sound art’, is problematic in its imprecise nature and allows for disparate usages. Sound studies is often applied to arts practices, especially the gallery arts and music, yet the academic field of sound studies has had very little to do with the creative arts. Instead, as published in the Sound Studies Reader and the Oxford Handbook of Sound Studies, sound studies are a close relative of cultural studies in the case of the former and science and technology studies in the latter. While I’m not interested in patrolling borders, the unclear nature of the term and its contradictory use in academic and everyday language does a disservice to the myriad of approaches to the discussion of sound. 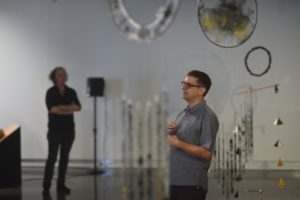